To the world out there, begging for help.

I feel compelled to let the world know about the June Ploiesti Siege and ask for everyone to help us here in Ploiesti, Romania. I never imagined I would get to see such unbelievable and widespread cruelty acts against homeless animals. In the last week I have felt just like a news reporter in a dangerous war zone, seeing first hand the casualties of a cruel, illegal and immoral war against animals. For there really is a battle zone out here, with unbelievably many casualties that suffered long, painful deaths. I know that after the June Ploiesti Siege against homeless animals I will never be the same again.

As a local animal protection and welfare organization, about a week ago we started receiving worrisome information from Ploiesti animal lovers about dogs vanishing in the middle of the night, or being found poisoned the following mornings. In one night alone, the night of June 13th-14th,unidentified men wearing blue or dark red overalls tranquilized and took in their vans dozens of dogs from the South and West neighborhoods of Ploiesti. None of these animals could be later found at the local Bucov pound. All these animals, dozens of them, simply vanished in thin air. Bucov shelter management and employees continuously denied having anything to do with these actions.

But this was only the beginning. In was the follow up which got us all stunned, speechless, in shock. Beginning the same night of June 13th-14th,dozens of animals got poisoned every single night, all over Ploiesti. No pattern, really. Dogs of all sizes and ages, from puppies of 6 weeks old to veterans that had been in their neighborhoods for as many as 9 years... Some sterilized and with ear tags, some even wearing collars. Some from the streets, while others from private factory courtyards. Many from areas with high stray dog density, yet others from areas with fairly low density. Some super friendly and relaxed dogs. Nothing seemed to make a difference. Dozens of animals every single night, and countless many more that vanished and whose bodies could not be found. This is the June Ploiesti Siege on stray dogs. 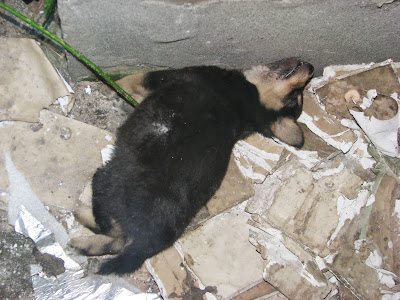 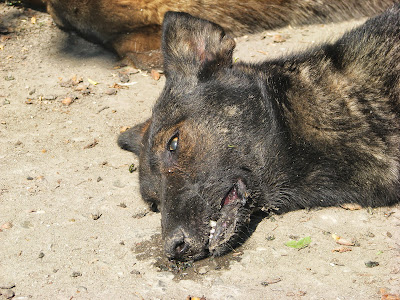 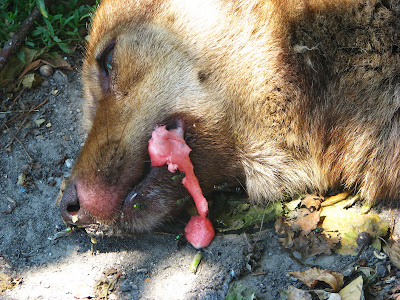 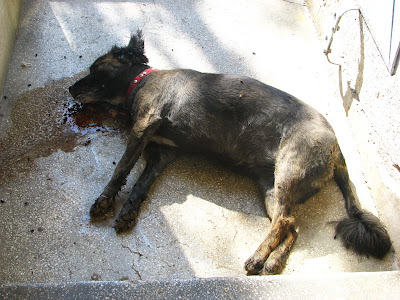 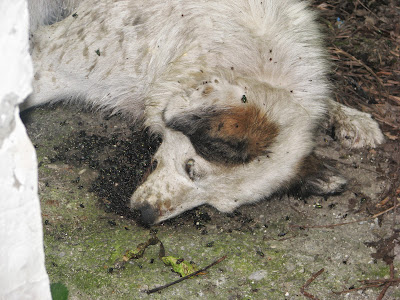 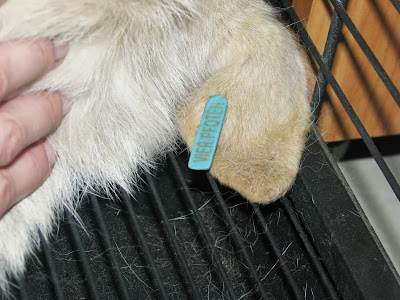 Sterilized by Vier Pfoten... A poisoned dog in agony, about to die

In the morning of June 18th we got word that a few dogs had been found poisoned in the courtyard of a private auto shop. And well, several more other dogs missing from that same place. We called the police and the local vet authority. Turns out this was the first official reporting of such poisonings. Many people had simply buried the bodies themselves. We kept on getting information about such poisoned animals, yet people did not know they could report them to the police. We accompanied the vet authority with the dead dog bodies to the lab for post mortem examination. We also had a press release locally about the Ploiesti stray dog poisonings, informing people what to do and where to report such events.

But it was the following day of June 19th which brought massive numbers of reported casualties... Including beloved strays that had been cared for by the community from puppyhood till old age. And whole packs from industrial sites and factory courtyards, simply decimated. In hot scorching weather, in an indescribable smell of decaying bodies, we took pictures to document the June Ploiesti Siege. Please be warned that the pictures from the following album documenting the June Ploiesti Siege against homeless animals are very disturbing. On the same day, the Town Hall announces starting up a committee to dig into the stray dog poisonings and discover the ones responsible.

The night of June 19th I happened to walk by yet another stray dog that appeared dead.... I came closer and realized this time it was a dieing dog, also the victim of poisoning. I called the vet and, not wanting to lose any precious second, I induced vomiting in the suffering animal. I thought if I could save her, it would still mean a tiny moral triumph in a disturbing week with too many losses. The vet soon came and administered her (it was a she sterilized by Vier Pfoten) treatment based on the symptoms it displayed, symptoms highly specific of poisoning. Unfortunately, the animal could not be helped, the poison had already reached deep, and soon it started having seizures. We could not save her... Please note this is a particularly hard to watch video of a stray dog of Ploiesti suffering a seizure episode after having been poisoned.


Now multiply this by hundreds... And you will understand the drama and the magnitude of the June Ploiesti Siege. Not just murdered dogs, not just hundreds of them (and possibly even more), but also them dieing horrible, slow, painful agonizing deaths. In quantity and quality, the June Ploiesti Siege is beyond brutal. And if you picture this in 2013 in a European Union country... there are no words.

Who are our main suspects?

Well, first and foremost our mayor, Iulian Badescu. Last year, in his electoral campaign, one of his main promises was to rid Ploiesti of stray dogs. Please have a look yourself at the posters used last year in his campaign: 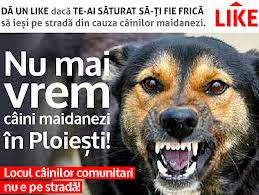 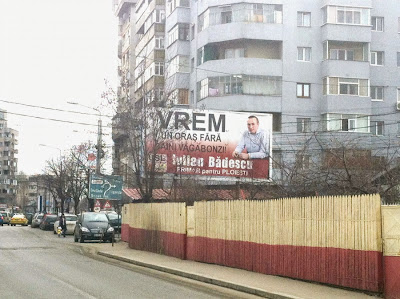 Secondly, we suspect the private company Coral Impex SRL, the company hired by our municipality for pest and bug control, but... also to pick up dead animal bodies and dispose of them. We talk about huge sums of money paid by the town hall to this private company for collecting and incinerating dead dog bodies. The more dead bodies, the more money Coral Impex SRL receives from the town hall... Money paid by our municipality from our taxes. They have the financial incentive, and they have the means, since they manipulate toxic substances and have access to large amounts of them. Furthermore, men wearing blue overalls (Coral Impex SRL employees have blue overalls...) have been spotted chasing dogs in the middle of the night, or spraying solutions in public places where dogs were found poisoned the following morning. 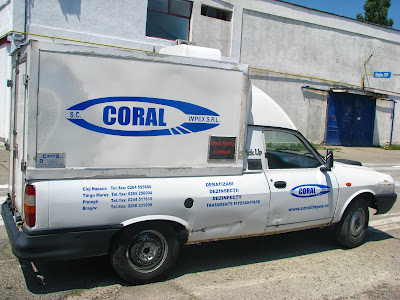 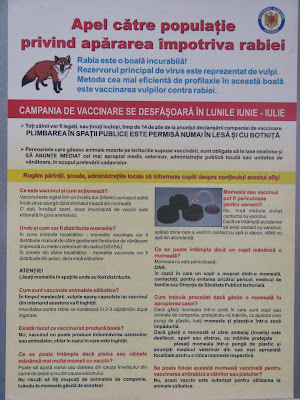 It is a bit hilarious that the committee designated by our mayor, Iulian Badescu, to investigate into the recent stray dog killings also includes the local vet authority, plus Coral Impex SRL, plus Bucov shelter management... It's hard to rate such committee (made up precisely of our main suspects...) with any bit of credibility.

Romania has, at least on paper, animal protection legislation, and the deeds that happened in the last week (acts of cruelty and killings) have, at least theoretically, been against written laws. A fair investigation and trial would by all means lead to prison and huge fines for the ones responsible. A fair one, that is.

All the more unfortunate is that this illegal and immoral campaign has gone out of hand. In the last 2 days there have been instances of secondary or residual poisonings of owned dogs. Owned dogs that had to be rushed to the vet with poisoning symptoms after going on walks in public areas (parking lots and parks) with their owners. Very soon children will go on summer break, and it will be them playing in these same public areas... Will we also have to see children rushed to hospital with poisoning symptoms, for these poisonings to stop? How bad does it have to get for the ones responsible for this to stop?

The world must know about the June Ploiesti Siege on stray animals, but also a siege on our community. It has been emotionally wrecking for countless people who lost dear animals. And in all seriousness, it has been very hard for the average citizen (especially our children) to walk by dieing suffering dogs or by dead dog bodies everywhere. Animal lover or not, nobody wants to see innocent souls suffering painful deaths, or death everywhere in the streets of Ploiesti. But that's exactly what we have had for the last week.

Please spread the word about the June Ploiesti Siege, for the world must know about it. We need an unbelievable amount of support locally and from abroad so we can see justice for these killings, so that the ones responsible will really be found and tried. Otherwise, dust and silence will set on yet another page of the book about Romanian stray dog tragedies.
Posted by StrayDogs at 8:23 AM

StrayDogs
My name is Alex Ionescu and I originally started this blog as means to raise awareness about the stray dogs of Ploiesti, Romania. With time I got to meet likewise minded people and together we have become the organization Romanian Stray Dogs Ploiesti (RSDP). We work towards the day when no pup would be born to be abandoned again in Ploiesti.